Original Document: Memorandum of Agreement between the Midland and Great Western Companies, March 1865

This agreement from March 1865 is a far more efficient working arrangement devised between the Midland and Great Western railway companies, who agreed to share amicably the short joint section of track which ran between the junction of their two lines and Great Malvern station. Perhaps most interesting, however, is the fourth clause, which allowed the Midland Railway to build its sheds and sidings at Tewkesbury Junction on Malvern Common. This document can also be found in the Local Studies section of Malvern Library, who have allowed me to reproduce it here. 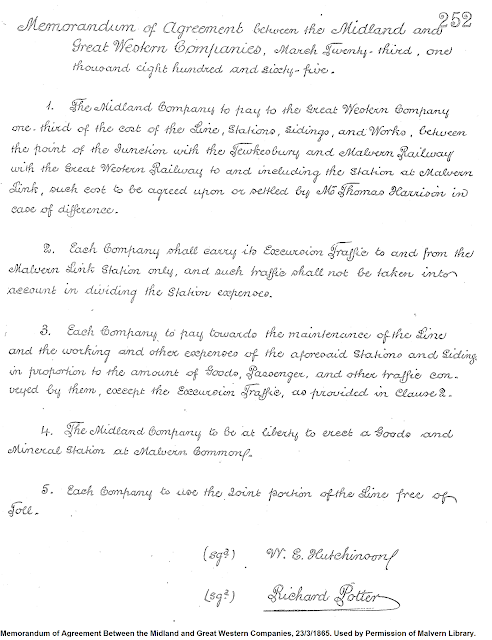 The full text of the agreement reads:

Memorandum of Agreement between the Midland and Great Western Companies, March Twenty-third, one thousand eight hundred and sixty-five.

1.      The Midland Company to pay to the Great Western Company one-third of the cost of the Line, Stations, Sidings, and Works, between the point of the Junction with the Tewkesbury and Malvern Railway with the Great Western Railway to and including the Station at Malvern Link, such cost to be agreed upon or settled by Mr Thomas Harrison in case of difference.

2.      Each Company shall carry its Excursion Traffic to and from the Malvern Link Station only, and such traffic shall not be taken into account in dividing the Station expenses.

3.      Each Company to pay towards the maintenance of the Line and the working and other expenses of the aforesaid Stations and Sidings in proportion to the amount of Goods, Passenger, and other traffic conveyed by them, except the Excursion Traffic, as provided in Clause 2.

4.      The Midland Company to be at liberty to erect a Goods and Mineral Station at Malvern Common.

5.      Each Company to use the joint portion of the Line free of Toll.