Upon leaving the Mythe Tunnel, situated below the eponymous house, the Ashchurch railway crossed the floodplain west of Tewkesbury by means of an embankment built sufficiently high to hold the line away from the floodplain of the River Avon. This embankment comprised several small bridges to enable cattle to pass under it, and ran for some 400 metres across open country.


The embankment was removed in 2013 as part of landscaping works designed to reduce the perennial risk of flooding in Tewkesbury. Those of you with better memories will recall that the news of this work was one of the triggers for my starting this project, determined as I was to photograph the remaining relics of the railway before any more of them were removed.


Pictures of the Mythe Tunnel are quite rare, and this excellent shot from Roger Smith shows the last train to leave Tewkesbury as it approaches the southern portal in 1961. Roger was in the prime location to take this photo, leaning out of a window at the rear of the leading carriage as it was pushed towards Ripple. Looking closely at the picture, it is also possible to see the small bridges in the embankment which were demolished in 2013, more of which below.

The pictures below are not my own, but come from Philip Halling's excellent blog post over on Geograph. The shots show the embankment in 2013, just before it was demolished, and give an idea of its original scope and scale. Whether or not the work has reduced the risk of flooding in Tewkesbury I cannot say, but along with the simultaneous removal of the M50 bridge at Ripple, the destruction of the embankment is a sad loss to local history which I was unfortunately too late to document.

My blog reaches its first birthday this week, and to celebrate I've spent a little bit of time putting together a fun little mini-project for you to enjoy. I recently found a tool online called Colorize It!, which has been developed by three chaps at UC Berkeley in the United States. It's a basic piece of code which allows you to colour-in old black-and-white photographs, and I've been tweaking the inputs a bit to try and produce the best results. Digital black-and-white images scanned from original negatives seem to work very well, whereas my scans of the photos sent to me in the post by donors don't quite seem to reach the same level. Some of these pictures also have a slightly 'postcardy' look about them with large blocks of vivid colour, but I've used my (basic!) photo editing skills to try and tidy things up around the edges where I can. In any case, it's a relatively quick and easy way of getting a real glimpse of what the original photographer was looking at when they pulled the trigger.

For this project, I decided to flick through my photo collection and see if I could recreate the route from Malvern Hanley Road up to Great Malvern in colourised photographs. There is unfortunately quite a large gap between Hanley Road and Peachfield Road - I simply don't have any photos of the area around Warren Farm, which is a great shame because this part of the route contains one of my absolute favourite pieces of Malvern railway architecture: 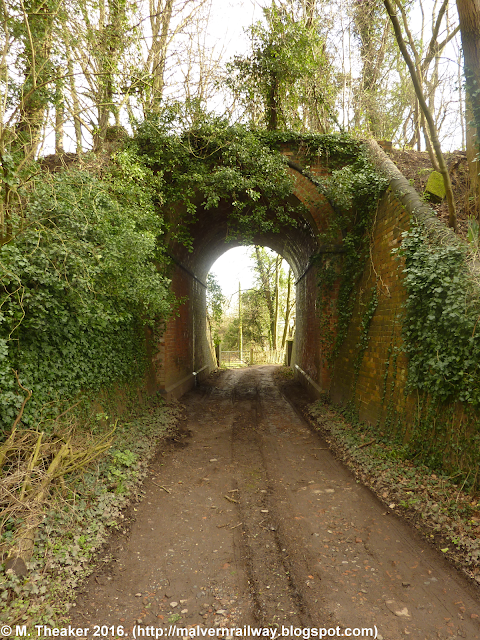 Apart from this, though, this stretch is probably the section I have the most original photos from, and so I decided to put together a 9-picture collage below for you to have a look at. Credit for these shots go to Tim Farebrother, Jim Clemens and John Mudge. 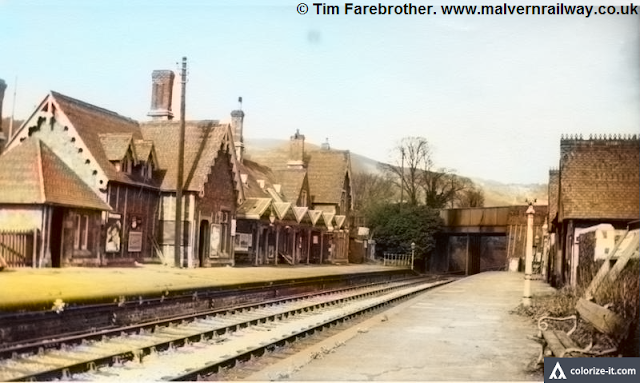 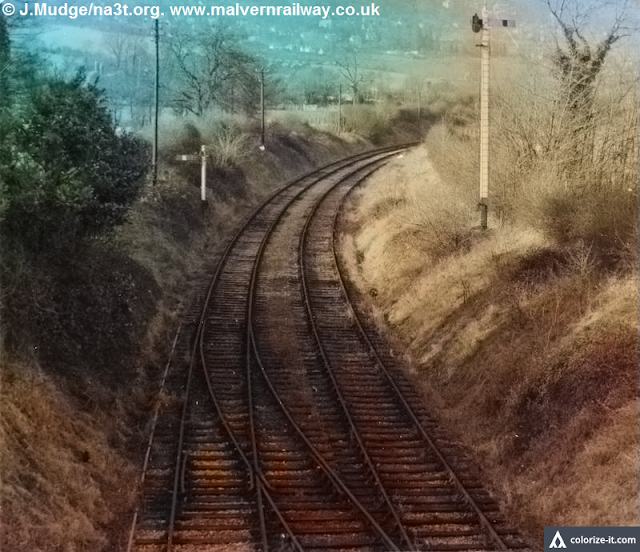 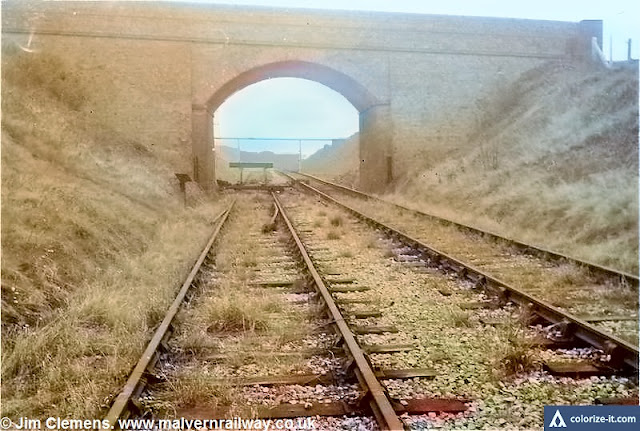 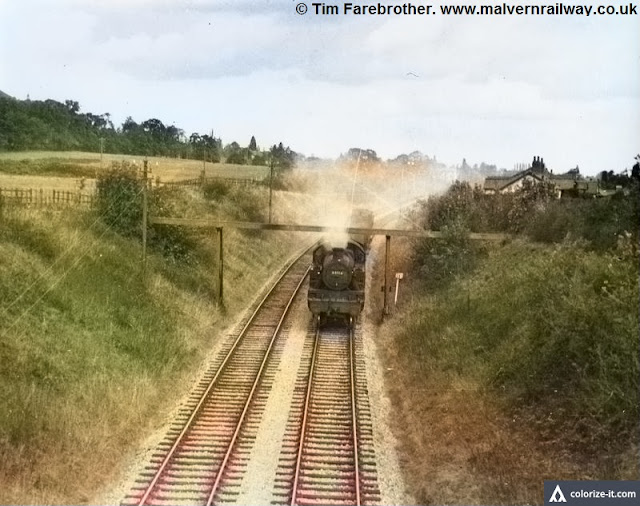 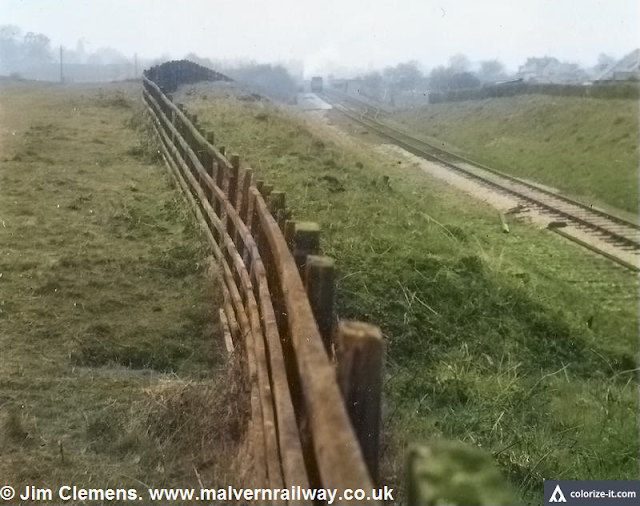 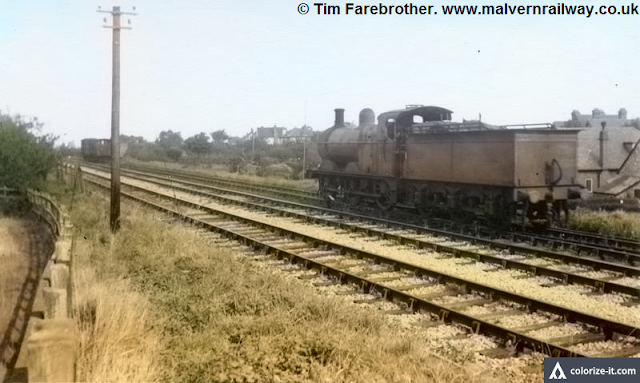 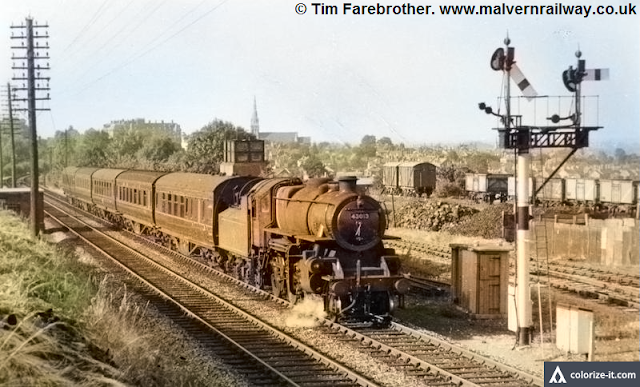 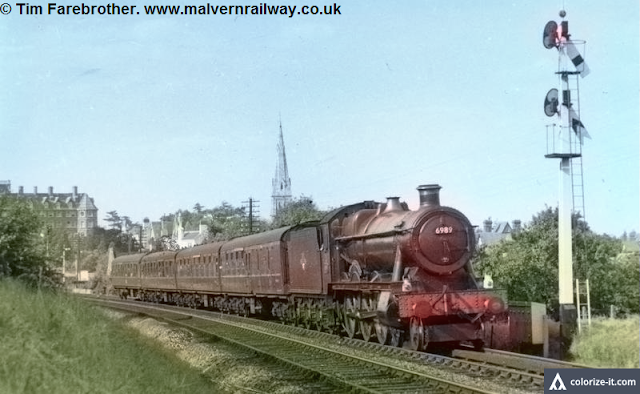 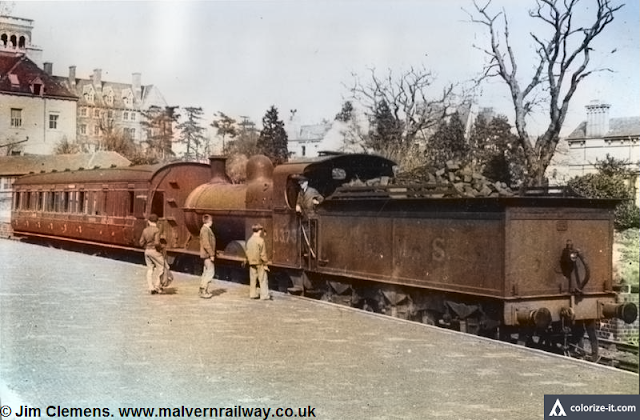 Writing this blog has given me some interesting experiences - walking across Upton Ham in a freezing 60mph wind with my friend Sam, and scrambling up an almost sheer embankment at Pigeon House Farm to name just a couple, but it's also been a real pleasure to come across the few remaining relics of what was once a very picturesque little country railway. The only thing left to say is to thank the people who have donated pictures to my site or let me onto their land to take my own, those who have been my companions on my walks, and in particular those who continue to leave comments telling me how much they enjoy the site. I started this as a bit of fun because I was bored while looking for work, but the response from the people of Malvern, Upton and Tewkesbury has been nothing but positive. Thank you!
Posted by MalvernRailway at 08:00 2 comments: 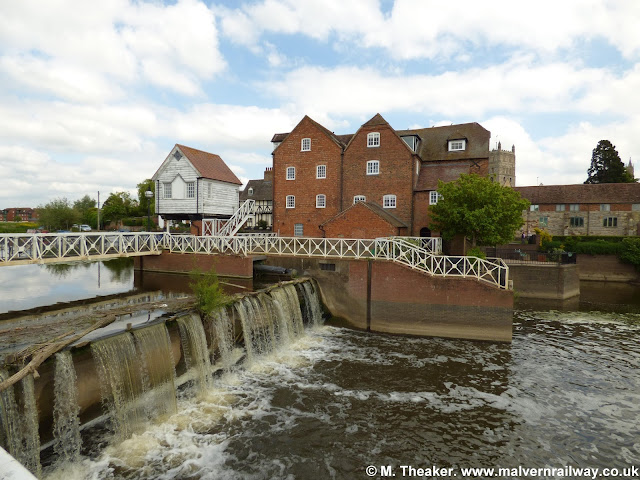 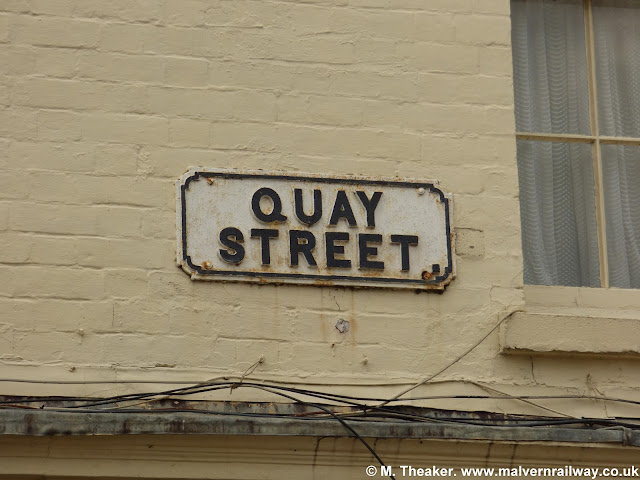 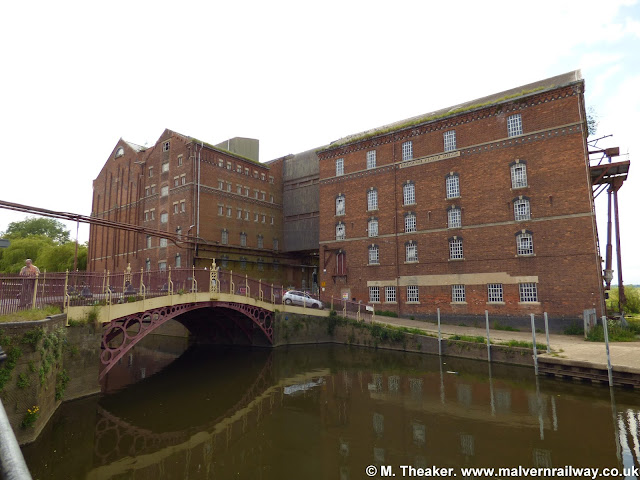 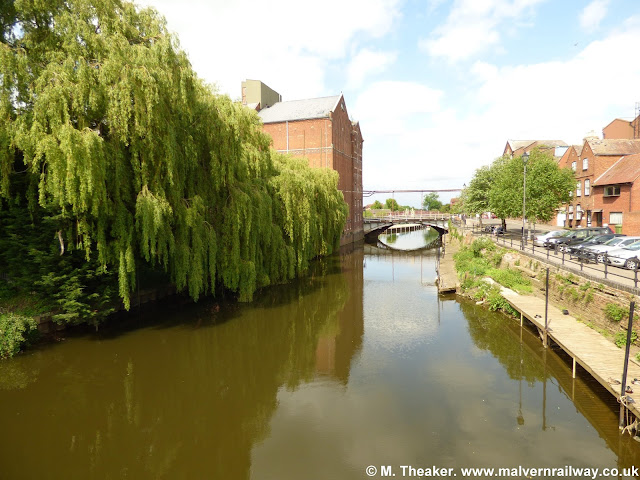 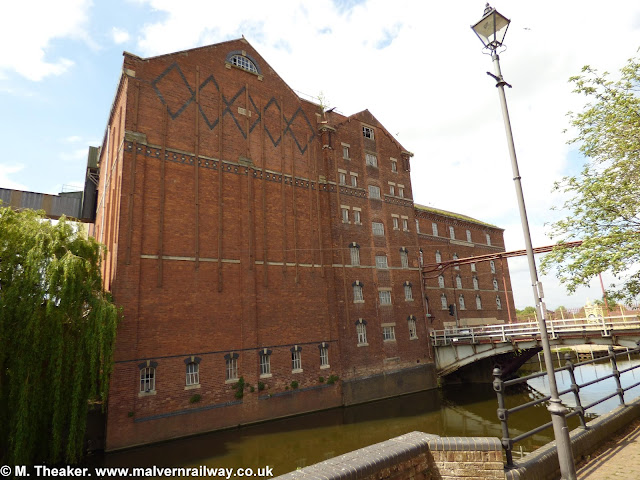 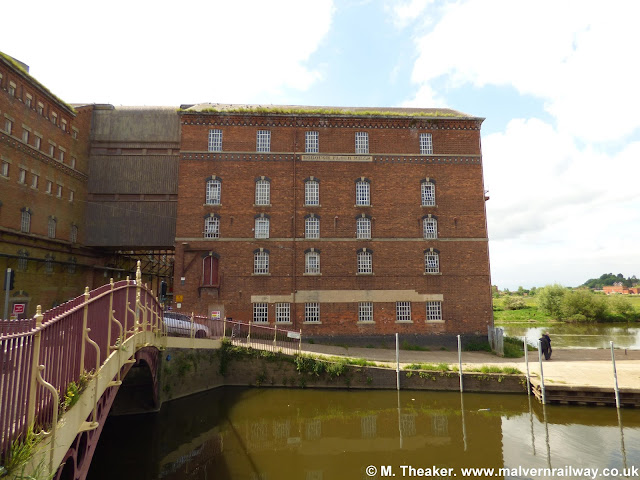 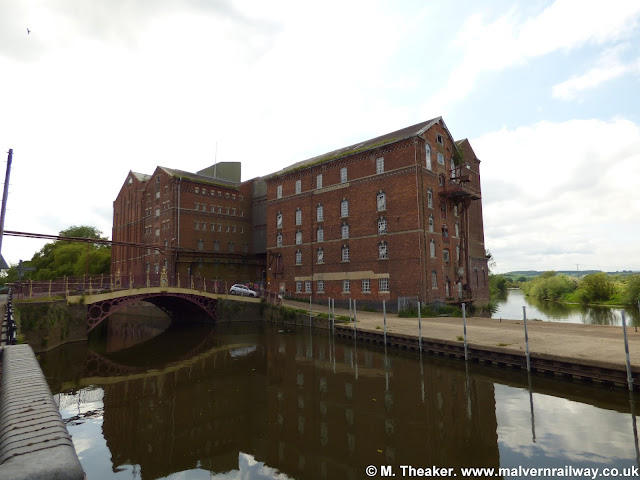 Looking for places to explore over the Christmas holiday, my friend Sam and I decided to take a look at the Ledbury Town Trail, a length of the old Ledbury-Gloucester railway which runs for a mile or so down through the town. The footpath (shown on this map) begins at Ledbury station and quickly turns south, passing behind the Homend before heading down to the River Leadon at the southern end of the town. We set out after lunch into a bright sunny afternoon but unfortunately the dull winter evening caught up with us prematurely. One to return to in better light!


The Ledbury and Gloucester Railway had a relatively short lifespan, opening in 1885 and closing in 1964. Built largely on the course of an ailing canal, the railway was amalgamated into the Great Western Railway in 1892. Taking a sharp southerly turn immediately upon leaving Ledbury station, the line also featured stops at Ledbury Town Halt, Greenway Halt, Dymock, Four Oaks Halt, Newent, Malswick Halt and Barbers Bridge.


While looking for historical photographs to complement my modern pictures, I came across the D.J. Norton Collection, a great set of shots taken around Ledbury in the late 1950s and early 1960s. Mark, the son of the original photographer, has been kind enough to let me use some of his collection here and so I encourage my readers to have a look at his fascinating site as soon as they have a chance.

Beginning the Ledbury Town Trail, perhaps the most interesting feature of the walk is the skew bridge which crosses Hereford Road at a shallow angle almost immediately outside Ledbury station. The bridge features dark blue ribs on the underside which give it a very contorted look, although the design is obviously sturdy enough to have lasted 135 years already!

The main part of the Ledbury Town Trail comprises an embankment which starts high above the town before gradually running downhill behind the Homend. This 1929 shot shows the embankment clearly on the right:

As the railway line descends onto flatter ground, it runs behind the Memorial Recreation Ground. This is quite a built-up area now, with several houses surrounding the playground, but it was once the site of Ledbury's other station, Ledbury Town Halt. The station itself was miniscule, comprising a single corrugated iron shed on a very short platform facing the single track just before it ran under Bridge Street. Nothing remains of the halt now, but a small space has been cleared to indicate where it once stood, approximately in line with where the two benches are in the shots below.

Another surviving original feature on the Ledbury Town Trail is the Woodleigh Road bridge, which follows the square stone style used by the builders of this route (a similar bridge survives at Rudford, among other places). We got there as the afternoon light was fading, but the structure was still quite impressive and looks to be in good condition. One of the good things about historical road bridges which crossed over railway lines (as opposed to vice-versa) is that the road usually held its purpose, meaning that the structure has to be maintained properly to this day. The LMS bridges at Warren Farm, Brotheridge Green and Upper Hook Road enjoy a similar fate.