Tewkesbury Junction is the name given to the old sidings complex south of Great Malvern station where the surviving Worcester-Hereford GWR line met the defunct Midland/LMS branch line from Ashchurch. During its heyday the Junction was a hive of activity, with several sidings full of coal wagons standing alongside a water tower, turntable and engine shed.


Today, the site straddles what was the shared line running north into Great Malvern, with a large wasteground to the east still in the possession of Network Rail. At first glance the site appears desolate, but it is possible to find a few remains from the old site, including a storage shed and the outline of the turntable, if you know where to look.


While perusing the rather excellent Britain From Above site, which features hundreds of pictures of the UK taken from an aeroplane during the 1930s, I came across this shot of Malvern Common which clearly shows the junction of the old Midland Railway from Ashchurch with the existing Great Western Line to Hereford. Clustered around the junction, we can see the engine shed and siding which sat opposite the Tewkesbury Junction signal box. Malvern Common itself is far balder than it is now, although little has changed at the Lees, Malvern College's houses overlooking the common.

This is a really unique perspective of the line, and so far as I know, one of the very few images to show the junction between the GWR and MR lines at all. It is certainly a picture which this blogger will struggle to take an imitation shot of! Britain from Above also have a few other pictures of Malvern, with this 1947 view from over North Hill (shown in low resolution for licencing reasons) providing the opposite view of the first picture:

The best image I have found of the Tewkesbury Junction site itself is this picture (below), kindly loaned from Malvern Museum, which was taken in 1938. The signal box is on the left, standing across the track from the Engine Shed and adjacent water tower. Just visible in the bottom right of the picture is the turntable used to reposition trains at what was also known for many years as the 'Coal Yard'.

This shot from Tim Farebrother, taken about 25 years later, shows how much the yard had already changed since its heyday: gone are the shed and signals belonging to the Midland line. 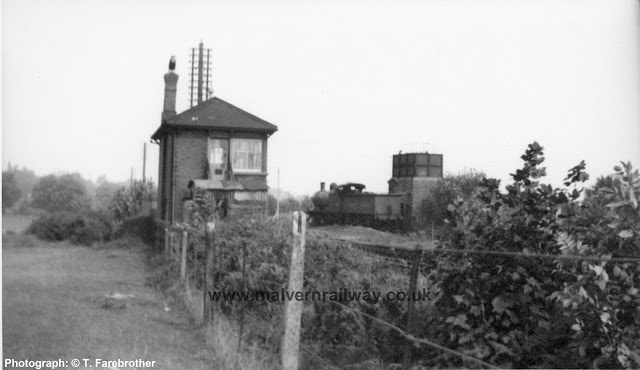 Probably the most well-known picture of the GWR signal box at Tewkesbury Junction is this one, which has appeared in several publications over the years. The matching shot beneath was taken from the Network Rail wasteground site on St Andrew's Road. More pictures of this site can be found further down the page.


One of my favourite pictures of the Junction is this one by Richard Moreton, who tells me that he took it while perched on the back fence of his father's house on St Andrew's Road. When the Midland Railway's cutting was filled in some years later, the houses adjacent were given the chance to purchase the spare land to extend their gardens: some did, but many did not, and so the odd tapered shape of the gardens is still clearly visible to walkers on the east side of Malvern Common. 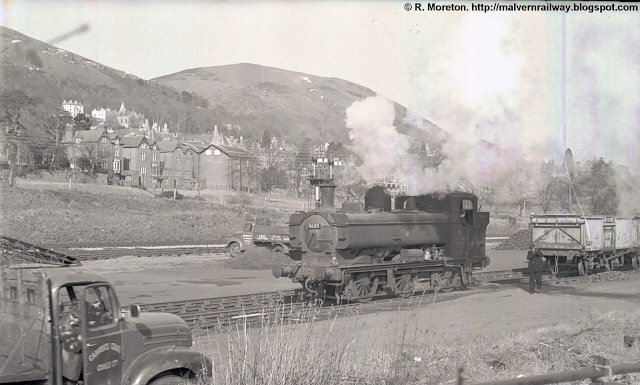 A similar perspective is shown here, with The Lees clearly visible in the background: 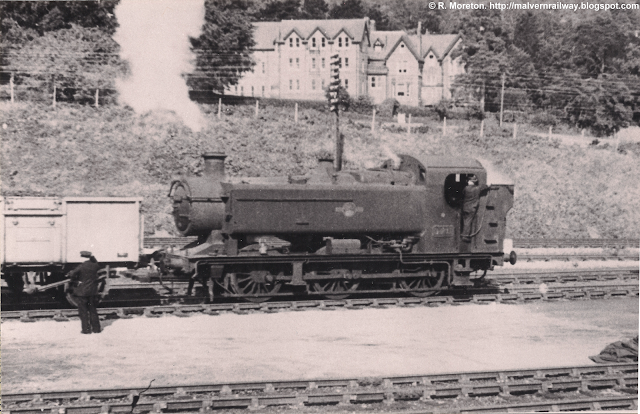 ...while this snowy scene taken in May(!) 1964 shows a Ledbury-Worcester train running north into Great Malvern. Note the Southern Rail carriage, too. 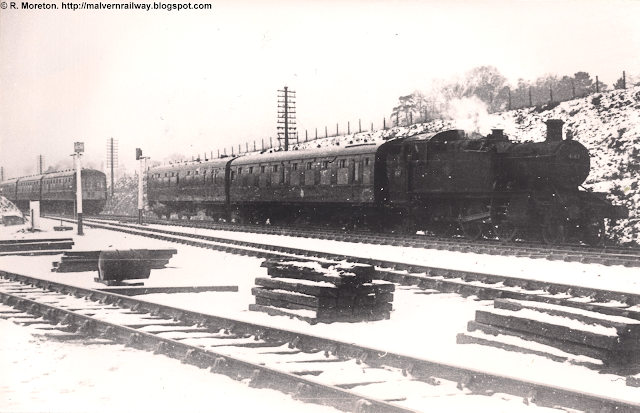 The next few shots have been chosen because they show off the outbuildings at Tewkesbury Junction more than the actual trains themselves. Note the array of sheds and the building work being done to dismantle the site.

Finally, there are also several wonderful pictures of the site as it was being wound down in the mid-60s. These three shots in particular show the Junction in its dying days after the closure of the Midland branch in 1952; note the decapitated signal box! 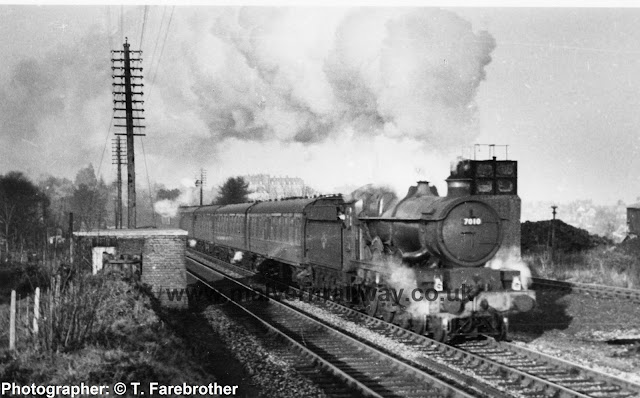 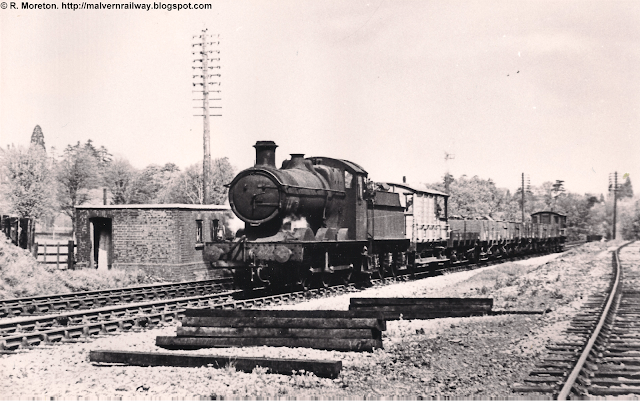 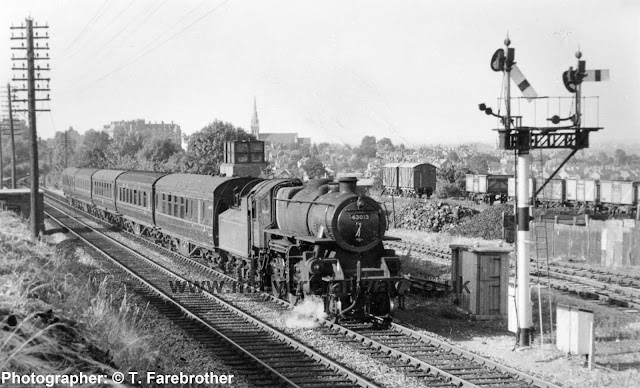 The 'Coal Yard' and Modern Photographs

The eastern side of Tewkesbury Junction is now wasteground owned by Network Rail, who use the site primarily to store materials and to access the Worcester-Hereford line between Great Malvern and Colwall Stations. Don't go walking on here without permission: as you can tell from some of the pictures, I had to arrange a site visitor permit and was accompanied by a woman from NR. The site itself is largely derelict, being a concrete rectangle with severely overgrown borders dotted with heaps of rubbish, among which can be found a lot of railway rubble and the legacy of previous flytipping. Between the demise of the railways and the late 1980s, the site was also used as a coal yard and is was during this time that the large concrete walls seen below were erected. These two pictures from Martyn Goodacre show how the site looked during its second career:


The engine shed has been obliterated almost as completely as the turntable - the image below shows what would have been the view along the line straight into the front door of the shed. Similarly, the water tower in front of the shed has been demolished. 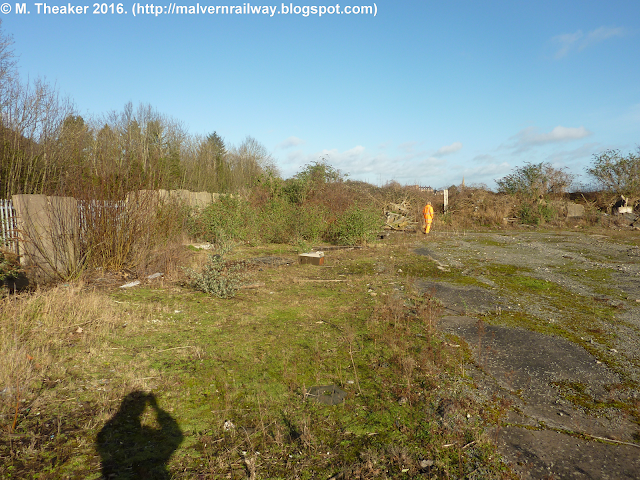 The only part of the shed left standing is this single timber, which sticks out of the undergrowth at the northern end of the Junction site. I looked for other remains, but the jungle here is just too dense once the abandoned oil drums and beer cans are taken into consideration. 
After the disappointing discovery that the water tower, shed and turntable had all essentially been wiped out, I was pleased to find one gem lurking in the undergrowth. A small shed, labelled 'Stores Shed 2', lies nestled in the hedge on the eastern side of the site, and seems to have been protected by a mature tree which grows right in front of it. I have been saddened several times on this project to see the forensic lengths which the bulldozers went to to remove any trace of the original fixtures and fittings (the demolition of the fine old Hanley Road station was particularly criminal), but the idea that this most insignificant of buildings should be the last man standing is a nice irony. Perhaps they thought that it would fall apart by itself.

Original buildings on this line are rare, so I clambered over the rubbish and under the tree (not easy!) to get closer to the shed. From the rear, it looks oddly like a guard's van, with a bowed roof, although the panelling is corrugated iron: 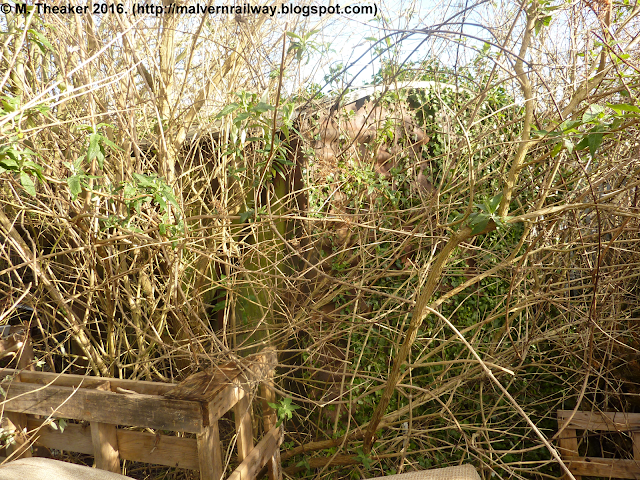 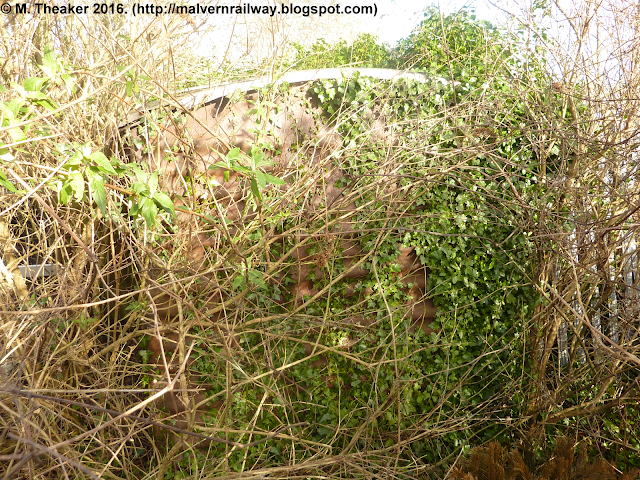 Once I got right up to the shed, it was in surprisingly good condition. The original markings on the door were still there, and the door bolt itself was still intact (both below): 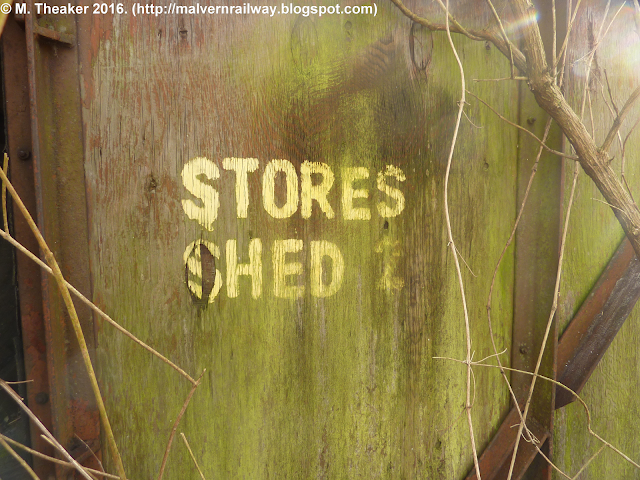 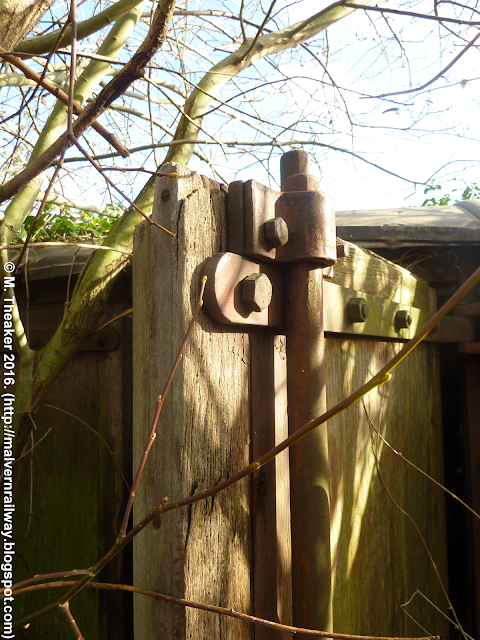 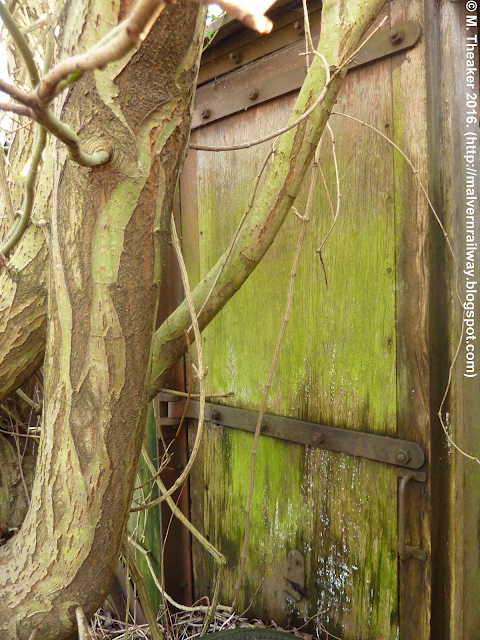 The Signal Box
As you can see from the picture at the top of this page, the Tewkesbury Junction signal box sat on almost the only 'flat' section of the route across Malvern Common, sited at the point where the embankment running down from the top of Thirlstane Road bridge declined into a cutting on its way to pass under Peachfield Road bridge. Today, the Common has considerably more trees, and the site of the original signal box is buried in trackside undergrowth. 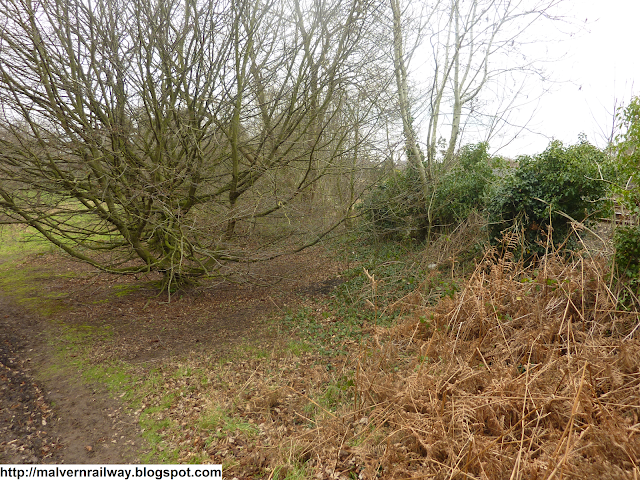 The rear of the signal box stood just to the right of this tree, behind the patch of dead bracken. A two-storey brick building, it would have sat on either side of the current lineside fence (buried in undergrowth on the extreme right), with the front quite close to the tracks. 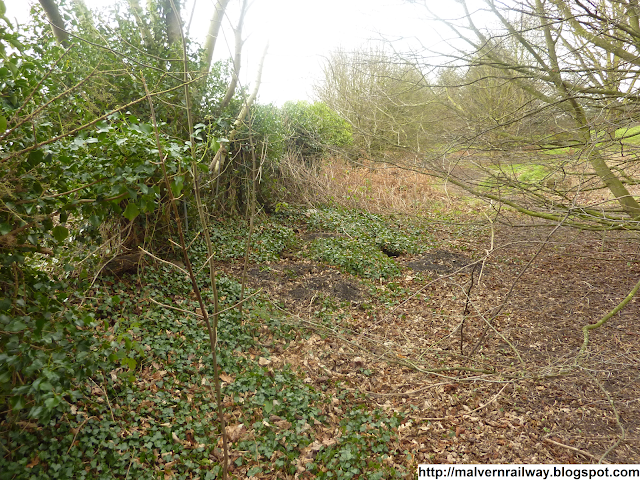 The above picture (taken from the reverse view, facing south) shows the only hint that a building ever stood here - the black patches of earth reveal a small man-made piece of raised ground which may be the foundations of the signal box. Without GPS and an old Ordnance Survey map, there would be no reason to suspect that this was anything other than the edge of a common. 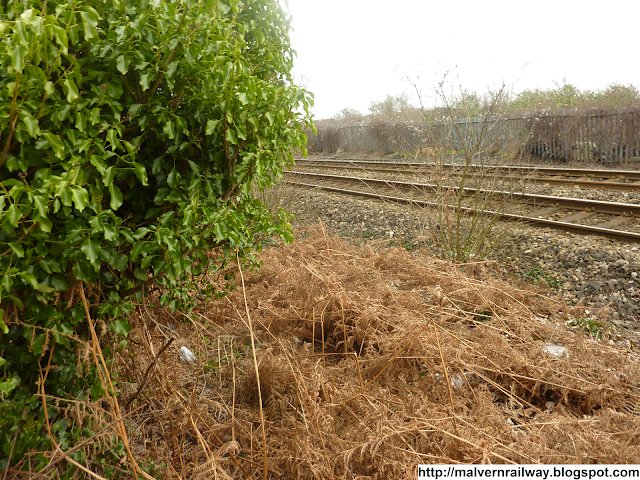 Here we see the tracks on the same level as what would have been the ground floor of the signal box. Not much to see here - the fenced-off site opposite is the site of the old Tewkesbury Junction, complete with engine shed, siding and points. 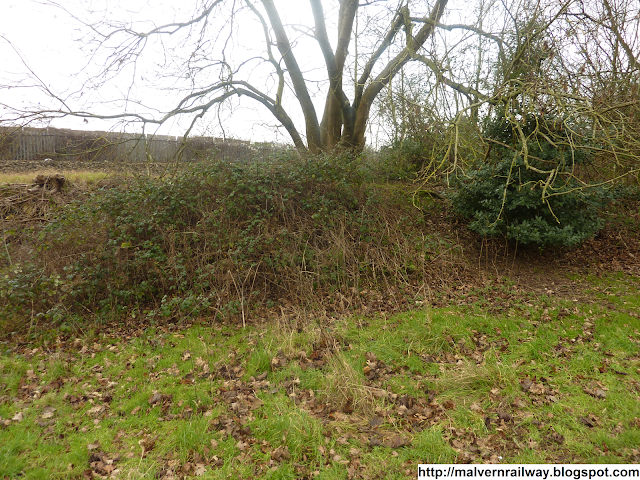 This mound sits just north of the old signal box and is clearly man-made, although whether it formed part of the original site or is just a result of nature reclaiming a pile of rubble left by demolition is unknown. There is nothing else left of the signal box - the workers dismantling the site clearly went to great pains to eradicate the building completely, a feature common to much of the route.
Posted by MalvernRailway at 20:49