After passing under the bridge at Brotheridge Green, the Malvern-Ashchurch line continued eastwards towards Upton-on-Severn along a comparatively low embankment. This section of the route was exclusively rural, dividing farms to the north from land held on the south of the line. Many thanks to John Clements (Pigeon House Farm) and Richard Bennalick (Yew Tree) for allowing me onto their land to photograph this section of the route.


Today, the old railway embankment is still easily recognisable but has nonetheless been substantially altered, with a couple of sections having been removed entirely to provide access for farm vehicles. Elsewhere, the embankment has found a curious second career, having been raised still further to provide a barrier to reduce the noise emanating from the South Worcester Shooting Ground. I think this feature may actually be unique to the sections of line I have seen so far: elsewhere, we have seen the line removed and cuttings infilled completely to allow development (as at the Three Counties' Shuttlefast Lane site) and we have also seen original sections preserved completely for other uses (as at Brotheridge Green nature reserve or at Worcestershire Golf Course public footpath). This is the only instance I have encountered where the original railway earthworks have been augmented and advanced to serve an entirely new purpose. It's certainly an innovative approach!


The following recollections of the line have been offered by John Clements, who grew up at Pigeon House Farm and whose family still own a large portion of the embankment on this part of the line. John recalls the problems presented by the railway cutting through the rural landscape:


'I can just about recall the last train and the tremendous relief it brought to my parents and grandparents. The track bisected the farm and often the dairy cows had to be taken across the track four times a day to reach the grazing on the far side. This involved several people standing up and down the line to try and prevent them wandering down the track looking for succulent morsels to eat. While I never witnessed an accident I heard tales of cows being struck and killed in the past – but that may have been a rural myth. Then there was the constant worry that the cattle may escape through the fences or some rambler might leave a gate open with dire consequences. There was also the risk of fire from sparks setting fire to adjacent hedges and corn fields. While the railway did provide a way of transporting produce it certainly was not popular with the farmers who adjoined it.'

The process of dismantling the railway did however create an opportunity to procure some cheap firewood, as John continues:


'After the tracks were removed they lifted the sleepers and took them away, I assume to be reused. The only thing they left were the little wooden bricks that secured the rails to the clamps. I remember the wood shed was full to the top with them and kept us warm for a couple of winters. They even removed the ballast from the track, again I assume to either be sold for road building or for use on other lines.'

It was at this stage that John managed to rescue an original sign which had been discarded on the embankment. He has kindly photographed it for me below: 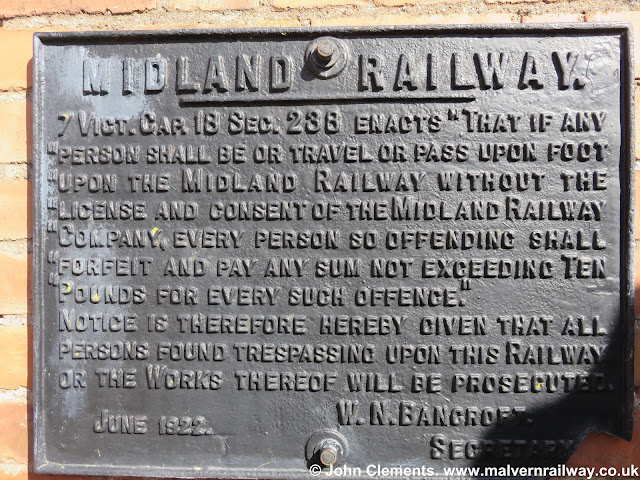 John concludes by recollecting some of the former railway's more recent history:


'When the discussions started about what to do with the old track there were various rumours allowed to circulate, one was that it would be turned into a relief road from Upton to Malvern so there would always be a way in and out during flooding. Eventually it was discovered that there was a covenant, created when the land was purchased from the owners, which meant the land the track occupied had to be offered back to the people who now owned the land from which it was taken. From memory it had to be purchased at full market value for agricultural land, which rankled with those who had to buy it back as it wasn’t returned to agriculture and was in effect useless. A few chose not to and these were eventually turned into nature reserves.

Before we had to give up keeping cattle due to the disastrous price of milk and the terrible impact TB had on our business, we used the embankment to out-winter cattle. As it was raised up it was very dry and this worked well. Since the cattle have now gone and I run the clay shooting ground we have raised the level of the embankments to act as a sound absorbing barrier. The sides are rapidly reverting to natural vegetation and provide a wonderful habitat for all manner of wildlife. It is gratifying that this piece of land is now providing a resource which the Victorians could never have envisaged but in some ways is just as valuable.'

Please note that my work on this section of line is not yet complete. My first attempt to photograph here was on a very blustery and wet August(!) morning, so I skipped the first 200m and final 300m or so of this stretch. The raised embankment south of Pigeon House Farm also has only a very narrow path on top and is heavily overgrown with brambles, making photography very challenging. Please also note that, owing to the lie of the land, it was easier to shoot these photographs walking back towards Malvern, rather than my usual method of walking towards Upton.