Heading south from Tewkesbury Junction and across Malvern Common you soon reach Peachfield Road, which crosses the surviving GWR bridge next to the site of the abandoned Malvern Wells (GWR) station. During the time of the Midland/LMS Ashchurch branch, Peachfield Road actually featured two consecutive railway bridges, although little trace remains of this today.


Starting at Tewkesbury Junction, this shot from Jim Clemens shows how busy the site was in its heyday. The Midland Railway bridge is just visible in the distance on the far right, although by the time this picture was taken the Malvern end of the Ashchurch branch had been closed for eight years.

Perhaps the best shot of what the old bridge used to look like comes from this postcard taken from near the corner of St Andrew's Road. The only postcard company I have managed to find by the name of Walker is that of John Walker & Co., who operated in London from 1903-10. The car coming down the bridge has no number plate that I can see, which means that this picture must have been taken before 1904. The picture below shows the view from the Peachfield Road LMS bridge, looking north towards Great Malvern. Note the aqueduct which channeled water across the Common. A matching shot is difficult because the cutting was later filled in, but have tried to show how the gardens of the houses on the right taper in line with where the railway once lay. 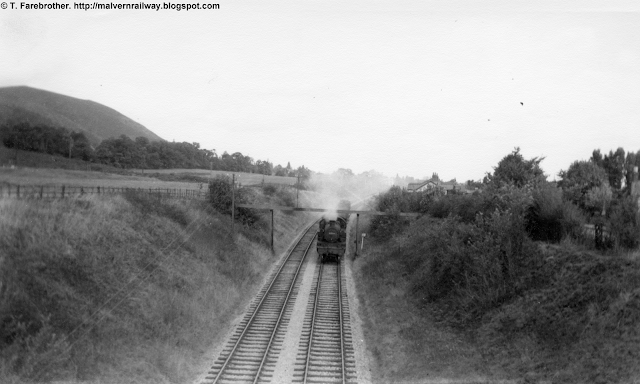 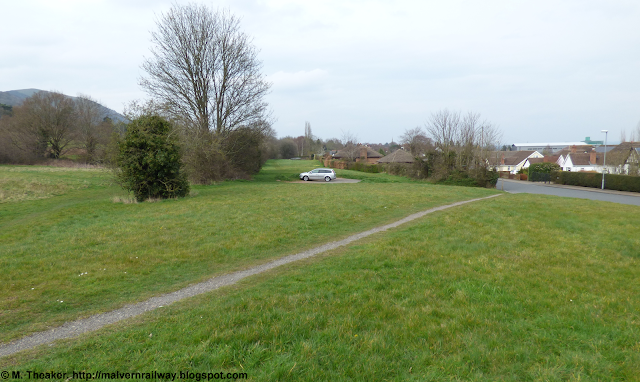 The same view in 2016.
Dropping down on the north side of where the bridge was, it is possible to see some remnants of where the old Midland cutting was in the gardens of those homeowners who opted to buy the filled-in cutting to extend their property.


South of the Bridge

Heading south from Peachfield Road, you immediately walk into a clearing which contains several railway relics. The clearing is only short, probably no more than fifty metres, but is marked by a low embankment flanked by old railway fence posts.


The only photograph I have been able to find of live railway activity south of Peachfield's LMS Bridge is this shot, taken in around 1950, showing a demolition train hauling broken sleepers back into Tewkesbury Junction:


With the Midland Railway bridge long demolished and the railway cutting partly infilled, it is quite difficult to recognise the path of the old Ashchurch branch today. Nevertheless, starting below Peachfield Road, the following three pictures show the approximate location of the bridge from the south side: 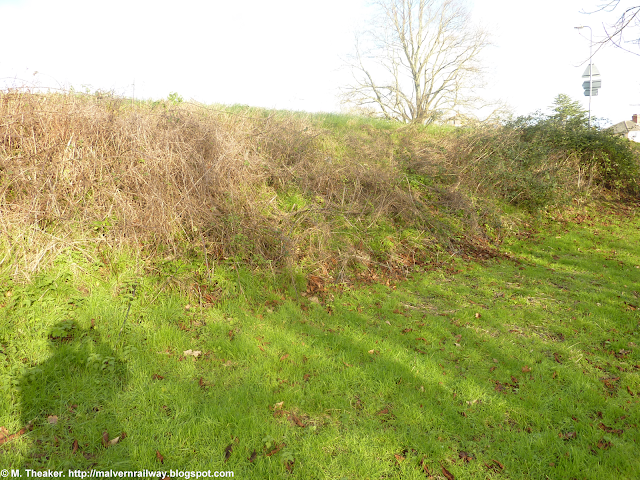 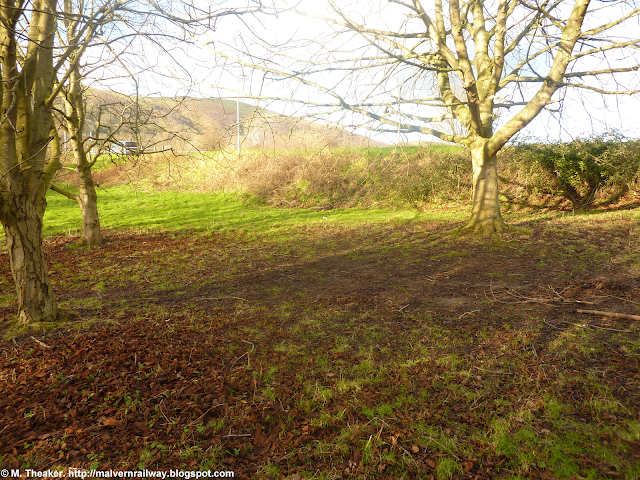 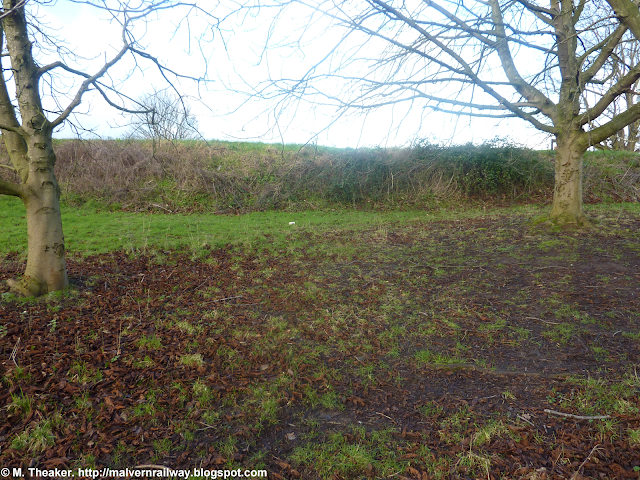 Turning around, the old railway treeline becomes apparent and the line leads down onto what is now a public footpath. On the right is a small housing estate which sits under where the old GWR station stands. 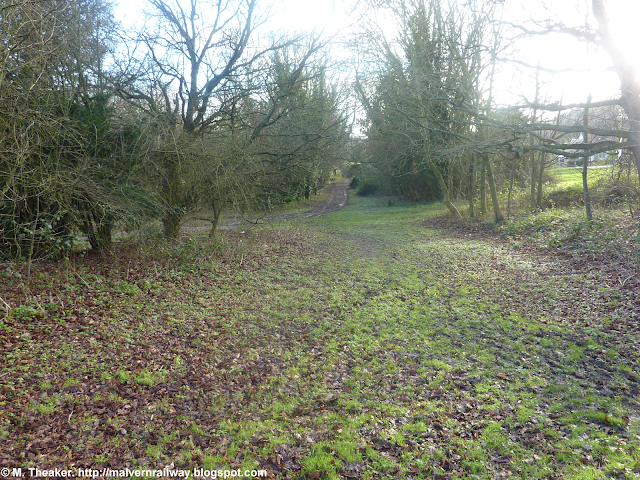 The path itself sits on a slight embankment, and looking down on the western side reveals some old concrete fenceposts which are still tangled up with loops of wire. 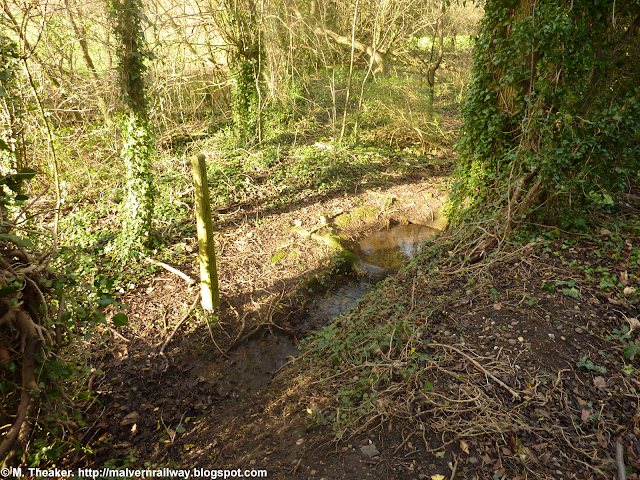 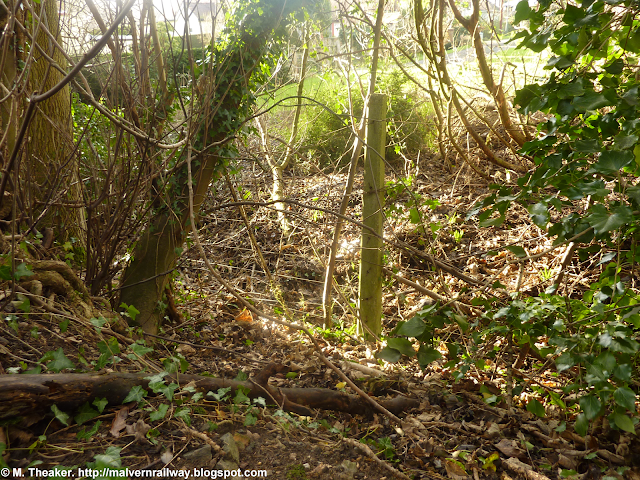 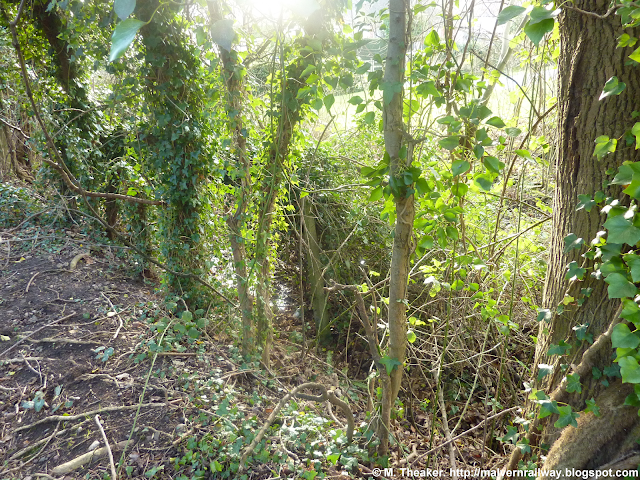 The eastern side of the old line is more open and provides an opportunity to see the old railway embankment more fully. 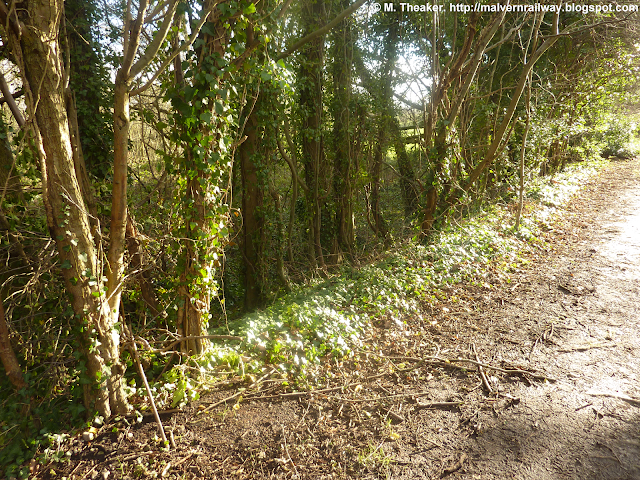 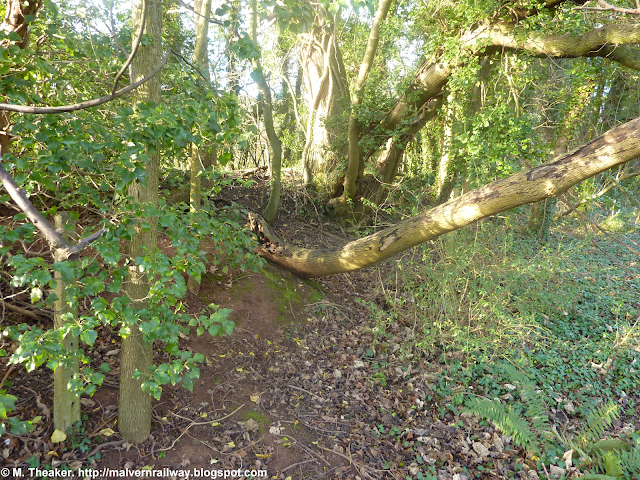 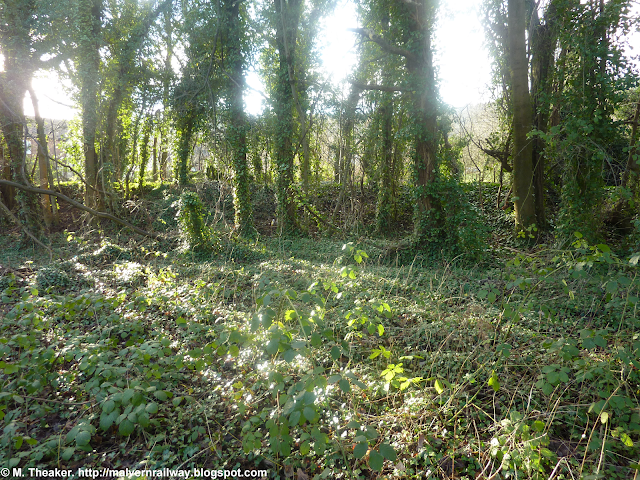 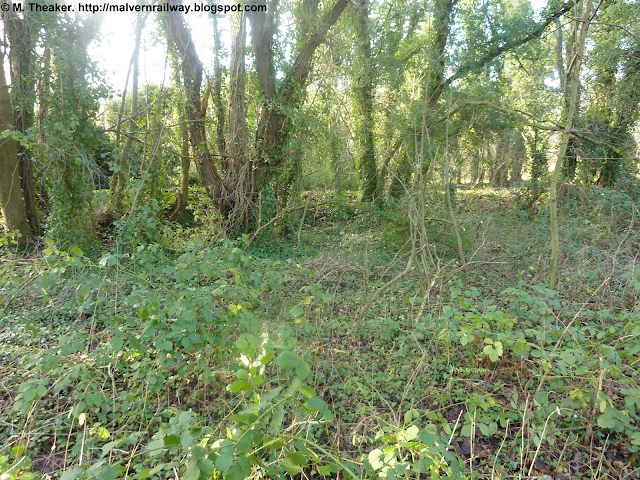 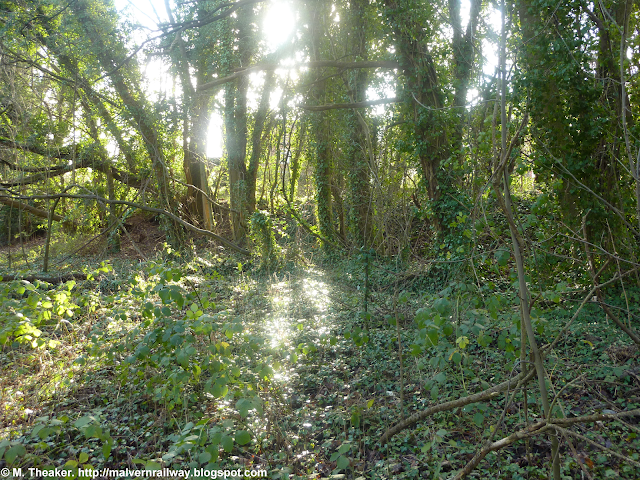 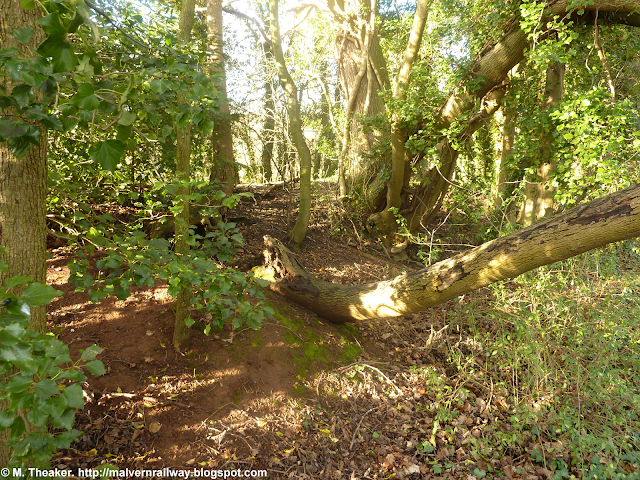 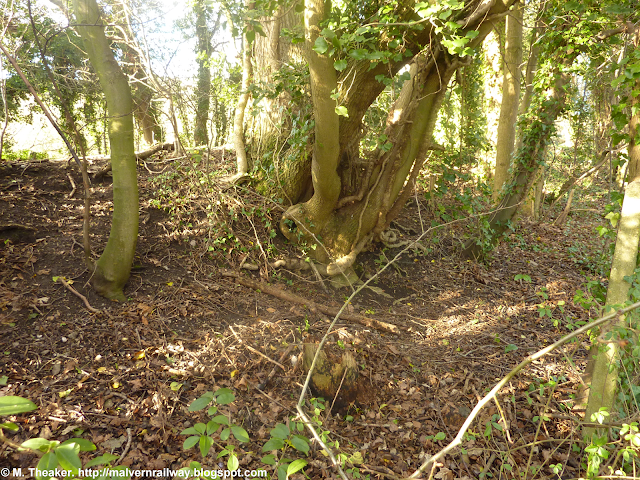 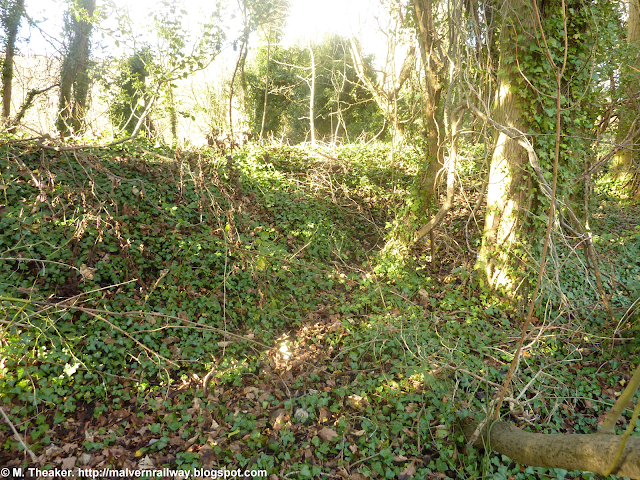 The eastern side of the embankment also features a few more fenceposts which have slowly been reclaimed by the undergrowth. Careful when walking here: there are lots of loose pieces of wire lying around which can be a tripping hazard. 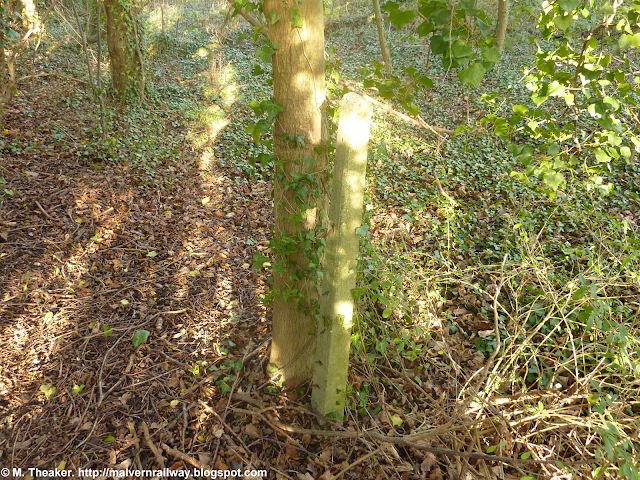 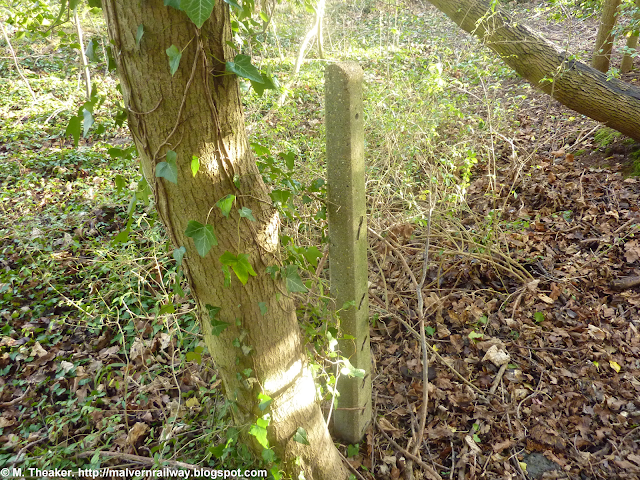 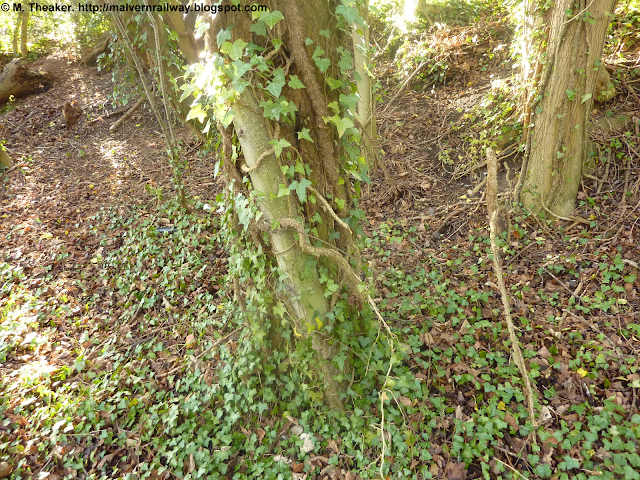 The path can get very muddy in winter but in the drier months it makes a very pleasant walk down to Worcestershire Golf Course.