This update comes courtesy of Colin Allbright, who has uncovered some interesting research regarding the wartime use of the Malvern-Colwall railway tunnel.

Two of the pictures previously uploaded to this site (shown again below) have already depicted the buildings used by the Admiralty at the eastern end of the tunnel, but Colin has helpfully annotated what these installations were actually for. Both ends of the old tunnel were in use by the Admiralty, with an armaments factory in Hereford and the main storage depot in Shropshire utilising it for overflow storage. Injured personnel were used to move munitions by hand from the standard gauge wagons to a narrow gauge railway that also ran around Colwall, with two locomotives being allocated to the tunnel work. 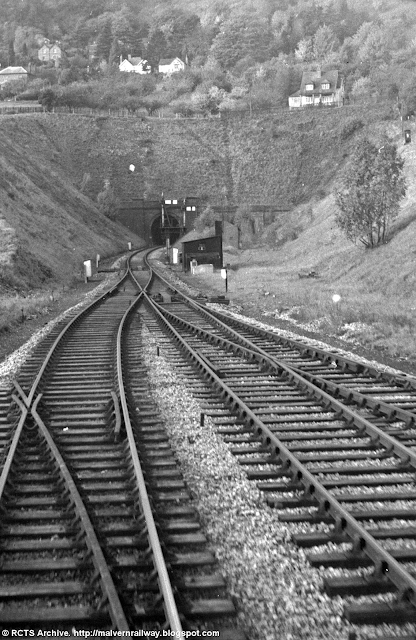 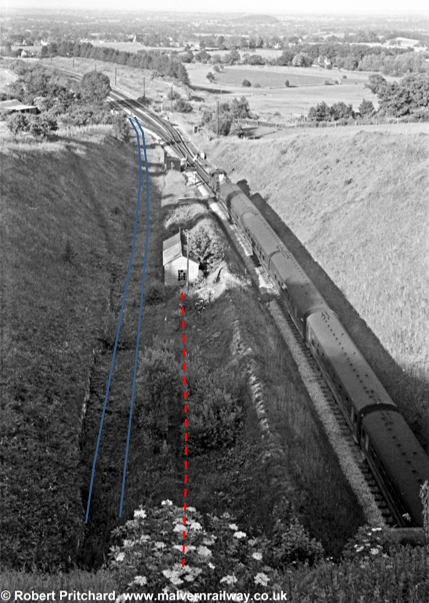 From the Colwall end, the two maps below show how the town's rail yard was developed by the Admiralty for wartime use. The above picture from 1903 shows the railway as it was pre-war, while the lower map from 1954 shows the remains of some interesting buildings. Just before the tunnel portal on the right side of the 1954 map, two grey buildings, one long and one shorter, are visible. The long building was the Guard and Admiralty hut, while the smaller building to the right was a narrow-gauge engine shed. The line running north of these two buildings is an extended existing siding, while a second siding (not pictured), was built to run up to the Guard hut.

Posted by MalvernRailway at 14:53 No comments:

This week's post comes courtesy of Alan Hodges, who has provided this fantastic shot of 4908 'Broome Hall' crossing Malvern Common on its way to Ledbury in 1955. The picture is even more interesting because it shows a rare angle of the northern side of the old LMS bridge under Peachfield Road. Broome Hall was built in 1929 and sadly dismantled at a scrapyard in South Wales in 1964, but it had already outlived the Tewkesbury branch line in the background by the time this picture was taken. 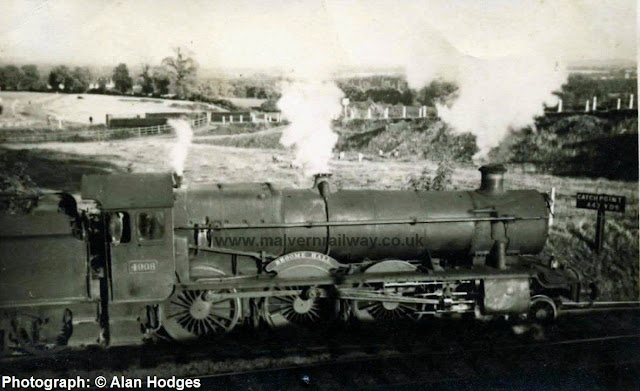 This week's post comes courtesy of Alan Hodges, who has sent me a batch of pictures featuring Great Malvern signal box. The picture is something of a rarity as it shows a double-header in Malvern, but I also find the sheer number of tracks interesting - Great Malvern station was much busier back then! Alan is also the first to respond to the Request List I set up to try and fill some gaps in my coverage of Malvern's historical railways. There are still plenty of missing pieces, however, so if anybody has any shots (particularly of the section north of Hanley Road!!) I'd be very grateful to see them.

A new post this week, thanks to a contributor who captured an unusual occurence at Great Malvern station over 55 years ago.


'These were taken on 16th June 1961, when a train of Southern region horseboxes, coach and well wagon with a carriage were unloaded at Great Malvern, all in connection with the Three Counties Show. This was the only occasion when I saw the end-loading dock on the down side in use (although I believe that in the mid-1950s when Sanger's Circus came to town the elephants got off there). At that time, it was possible to walk from the down-side exit along an unsurfaced extension of Thorngrove Road, turning left by Imperial Garage and coming out in Manby Road. There was a gate for vehicles unloaded from the loading dock to exit via this unsurfaced road. I suppose in the days of the water-cure this could have been a regular occurence.

The bay platform, after the closure of the Ashchurch line, was used for a variety of trains... the pigeon train, the school baggage train, and from 1959-61, a local Worcester-Ledbury train recessed there in the afternoon for an hour or so. I used to catch it to get home from school, as the Paddington train ran non-stop from Great Malvern to Hereford, and I needed to retrieve my bike from Malvern Wells station.'

The next shot is of a 'pigeon train' waiting in the Midland Bay at Great Malvern.


'The pigeon train was usually a diesel multiple unit or a loco with parcel vans carrying hundreds of pigeons in baskets. These were racing pigeons from all over the Midlands, sent by their owners by rail, to be released a distance away. The pigeons would then fly back home, getting valuable racing practice. It's amazing, but this was a regular weekly event. I don't know if the pigeon fanciers sent their racing pigeons elsewhere - they must have done - but Malvern was a regular destination. British Rail charged to carry the baskets with ten or fifteen pigeons in each one. The baskets were gathered together in groups by region then sent here on one train. When the train pulled in, station staff and us trainspotters would unload the baskets onto luggage trolleys, then line the trolleys up on the platform edge. Then we'd unbuckle the baskets and let out the racing birds in one big feathery cloud. Great fun! I have no idea when this stopped.'

Posted by MalvernRailway at 08:46 No comments:

This week I was contacted by another historian who has kindly provided me with some more pictures of the Dutch soldiers based at Wood Farm Camp during World War Two. On seeing the shots, I remembered that I had also received a picture of a commerorative plate which was presented to the Welcome Club on Church Street by members of the Dutch brigade resident in Malvern. I'll add these new pictures to the main article on the Dutch soldiers in Malvern Wells during the war. Enjoy!


The station itself is not an original piece of GWR architecture, having been built in 1984 as part of the SVR's expansion southwards from Bewdley. Constructed on disused sidings formerly owned by British Rail, the station is therefore much younger than its cousin at Bridgnorth (opened 1862). Nevertheless, the station maintains a bygone style with Edwardian glass roofs and wooden awnings.